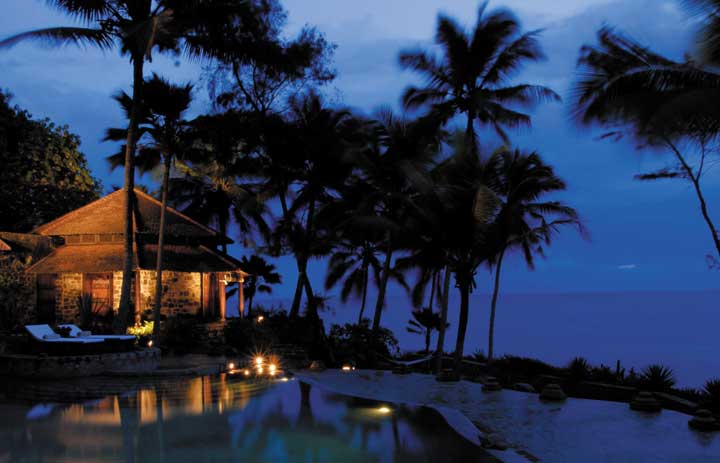 On arrival meet at Trivandrum International Airport transfer to Kovalam Beach, checking in at the hotel upon arrival.

Situated at around 13 kms from Thiruvananthapuram, Kovalam is an idyllic beach town famous for its three adjacent crescent beaches. There’s a huge rocky promontory on the beach as well that creates a bay of calm and shallow waters suitable for sea bathing. Kovalam offers a variety of activities and leisure options at the beach. Some of them are sunbathing, herbal body toning, swimming, cultural programs, and catamaran cruising.

Usually, the activities at the beach start late in the day that continues until night. Tourists can also find a range of budget cottages, convention facilities, shopping zones, health resorts, and Yoga and Ayurvedic massage centers. At Kovalam, you get a wide range of five-star and budget hotels, and the food options available at restaurants range from Continental to South Indian delicacies.

Kovalam beach is rated among the top 100 beaches in the world. With inviting blue waters and an exotic crescent shape, Kovalam is Kerala’s coastal paradise. After checking in, the rest of the day is to stroll through the sands and witness the sundown on Kovalam’s scenic horizon. Overnight stay will be at Niraamaya - Rock garden king. 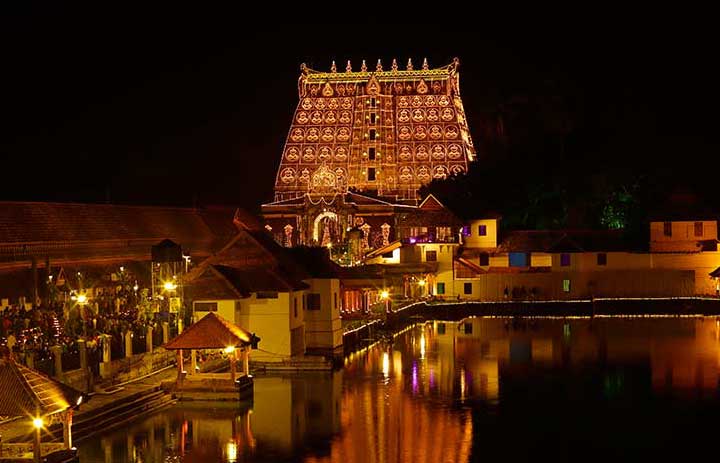 After breakfast, you will be taken on a tour of the historic city of Thiruvananthapuram. This will include visits to Padmanabhaswamy Temple, Horse Palace, Napier Museum, and Srichitra Art Gallery.

Sree Padmanabhaswamy Temple was constructed in the 8th century and is dedicated to Lord Vishnu. It is said to be one of the 108 holy abodes or “Divya Desams” of Lord Vishnu, where Padmanabha, his reincarnation is worshipped. Besides, it is one of the few temples in India, where only Hindus are allowed to enter. The devotees follow strict rules of worship and dress codes and gather in massive numbers to get a glimpse of the deity.

The palace of the horses is also known as the “Kuthiramalika Palace Museum”. It is a two-storied palace not very far from the Sree Padmanabhaswamy Temple and has 122 wooden horses carved into the wooden wall brackets. Kuthiramalika Palace Museum was built by Swathi Thirunal Balaram Varma, who was the ruler of the Travancore Kingdom in British India. Constructed from teak wood, rosewood, marble, and granite, the museum holds several idols and sculptures, Kathakali figures, paintings, Belgian mirrors, and other priceless collections of the Travancore family.

Right in the heart of Thiruvananthapuram lies the famous Napier Museum. It is named after John Napier, the former Madras Governor General. One can see a good mix of architectural styles in the museum – Indian, Chinese, Kerala, and Mughal. It houses several bronze idols, ancient ornaments, ivory carvings, and a temple chariot. The Japanese shadow-play leader that is used to depict the epic of the Mahabharata and Ramayana is a major attraction of the museum.

Sri Chitra Thirunal, the erstwhile Maharaja of Travancore, first opened the Sri Chitra Art Gallery to the public on the 25th of September, 1935. The art gallery provides a collection of paintings that denote the different genres and painting styles in India as well as from other parts of Asia. The Royal House of Travancore and the Kilimanoor Royal family have contributed to much of the paintings collection in the gallery.

Lunch will be back at the hotel and afternoon will be free to relax by the beach. Overnight stay will be at Niraamaya - Rock garden king. 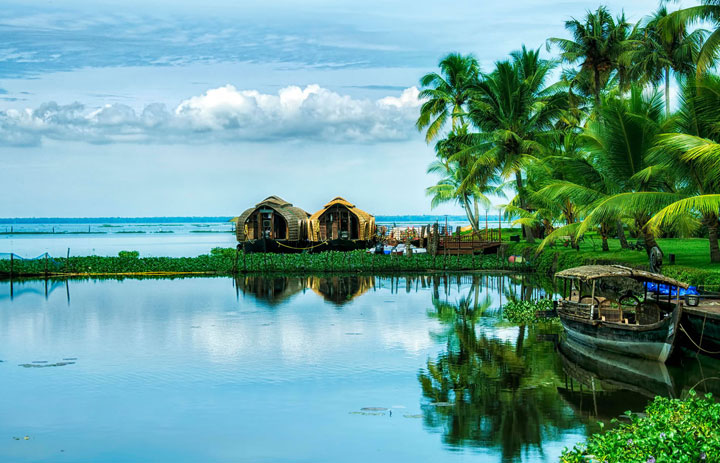 The third day starts with breakfast and thereafter proceed to Kumarakom the enchanting backwater region of Kerala. On arrival check into a beautiful backwater resort. The rest of the day is free to relax in the resort, overnight at Kumarakom Lake Resort - Luxury Pavillion Room. 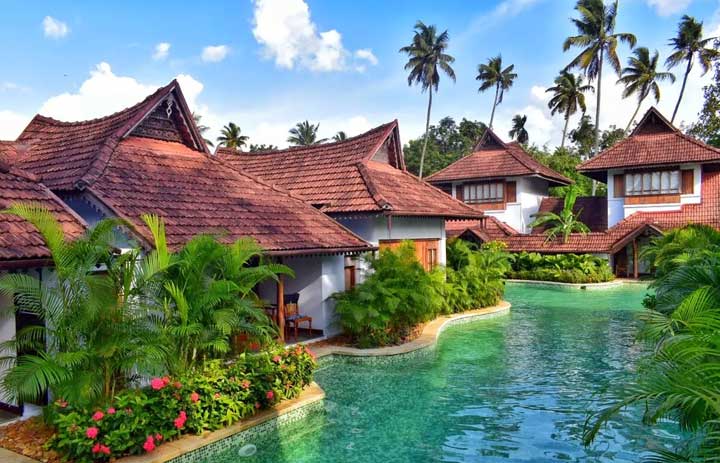 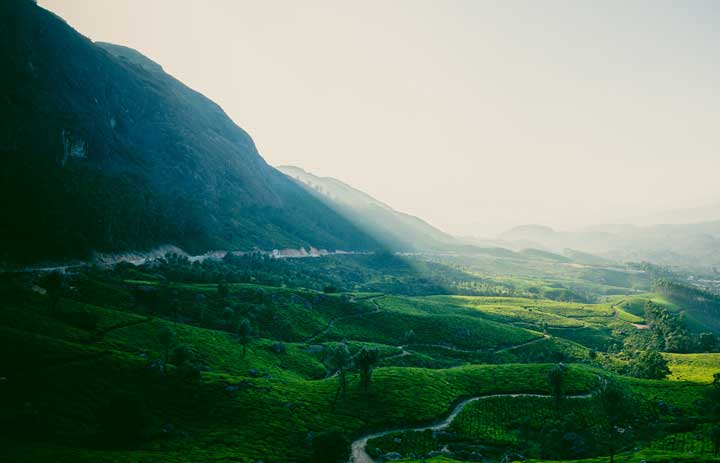 After a relaxed breakfast at the hotel, we take a scenic drive to Munnar, a hill station located 1600 meters above sea level. Once the summer resort of the erstwhile British administration in South India, it retains its colonial charm and is famous for its tea plantations once owned by the British they are now mostly privately owned. With sprawling estates, rolling hills, sparkling waterfalls, picture postcard hamlets, and undulating valleys, Munnar is an ideal holiday destination. Evening Hi-Tea at the resort. Soft trekking inside the resort. The balance of the day is at leisure, to enjoy the ambiance of Munnar. Overnight stay at Spice Tree - Classic Jacuzzi. 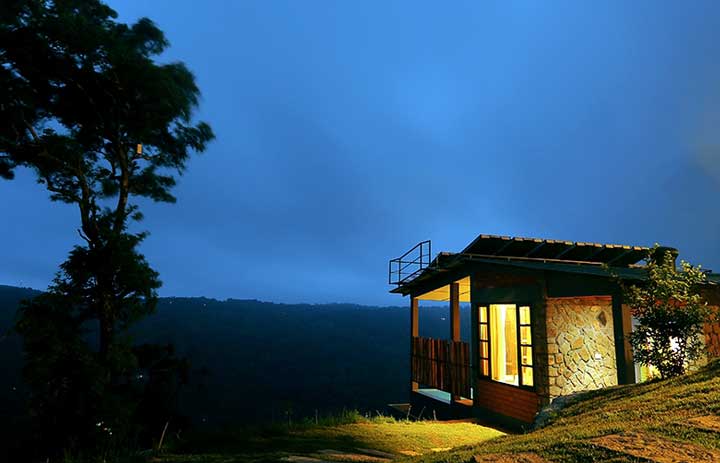 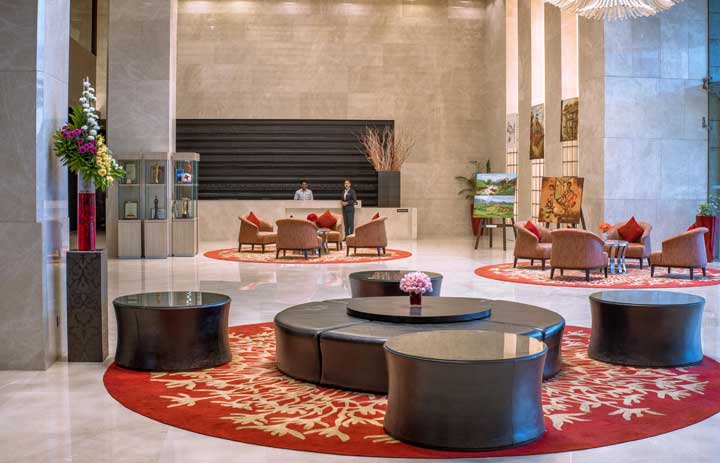 After breakfast transfer to Cochin. On the way experience Activities like Ecstasy ride, zipline, and Bali swing. On arrival check into the hotel. Afternoon you can go sightseeing in Cochin. Here you can see the St Francis Church, the oldest Church in India, 500-year-old Portuguese Houses, Chinese fishing nets, 16th-century Synagogue, Jew Town, and Mattancherry Palace, built by the Portuguese, this Palace contains some of India’s most beautiful murals. Evening Sunset cruise. Overnight stay at Crown plaza - Standard city view. 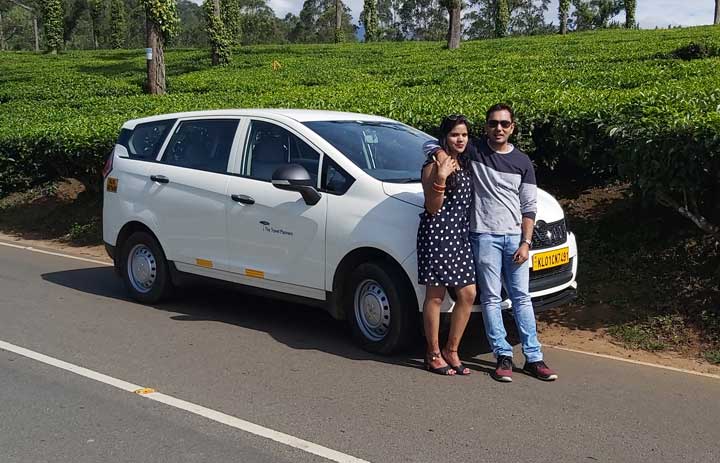 The morning after breakfast transfer with our representative to Cochin airport for your flight back home.