What types of food are popular in India?

Indian food, with its hodgepodge of ingredients and intoxicating aromas, is coveted around the world.

Every region has its own distinct cuisine that reflects its inherent culture. For example, the cuisine of North India is diversely different from that of South India.

Heavy doses of cardamom, cayenne, tamarind and other flavors can overwhelm an unfamiliar palate. Together, they help form the pillars of what tastes so good to so many people.

In a large new analysis of more than 2,000 popular recipes, data scientists have discovered perhaps the key reason why Indian food tastes so unique:

It does something radical with flavors, something very different from what we tend to do in the United States and the rest of Western culture. And it does it at the molecular level.

The Indian food embraces the essence of every Indian culture. Though the Indian food holds a tag of spicy, hot, greasy, heavy and fatty, the one thing that is not likely to come across your mind is the use of authentic spices that are actually important for your health

When it comes to South Indian food, the spices take over to bring a distinct taste to the table. The climate is hot and humid and most of the states here are coastal. From Andhra Pradesh comes a hot and spicy cuisine replete with delectable seafood. Tamil Nadu is famous for its Chettinad cuisine which is largely vegetarian and considerably fiery. If you go to Kerala, you’ll find the Malabari cuisine with its brilliant seafood options. The royal Nizami cuisine, which is rich in flavour and contains nuts, dried fruits, and expensive spices can be found in Hyderabad.

South Indian meals are really famous and you should definitely try them. Most of the meals centre around rice or are rice-based. There is Sambar (lentil soul-like dish tempered with spices and chillies) and Rasam (a hot, sour and spicy soup-like dish) along with it. Some of the popular Southern India foods are idli (steamed rice cakes), dosa and uthappam (rice batter and lentil flour pancake). The common oils used are sunflower and canola oil. Spices are one of the most important parts of South Indian food. The most important ones are curry leaves, mustard, Asafoetida, chillies, and fenugreek leaves.

An India food tour is incomplete without experiencing the tasty Kerala food. All Kerala meals have a lingering tinge of coconut. Some of the famous dishes from the region are Malabari Fish Curry, Thoran, Pork Vindaloo, etc. Finally, don’t miss out on the wide array of Kerala street food.

Want to embark on the journey of discovering the manifold dishes of South India? Let’s begin. 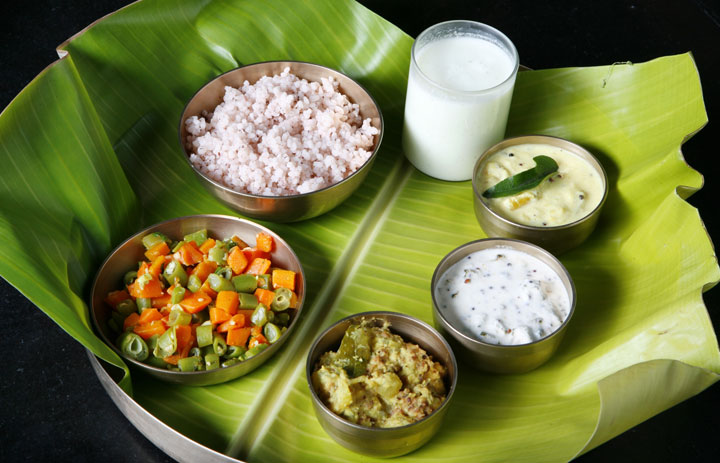 Pick up from Cochin airport and transfer to Cochin. On arrival, check in to the Hotel. In the evening visit Greenix village to see kathakali dance performance, the dance drama of Kerala. Overnight at Dutch Bungalow In the morning, visit fort cochin, Jewish synagogoue, Mattancherry Palace, chinese fishing nets, St Francis church. Later visit a local family to be shown round a local market for ingredients and then a hands on lesson in preparing and cooking a range of dishes (and then eating them).Chicken and Paneer Jalfrezi, Beetroot Thoran, Neema’s Scrambled Cauliflower & Bhindi Fry. Overnight Dutch Bungalow. 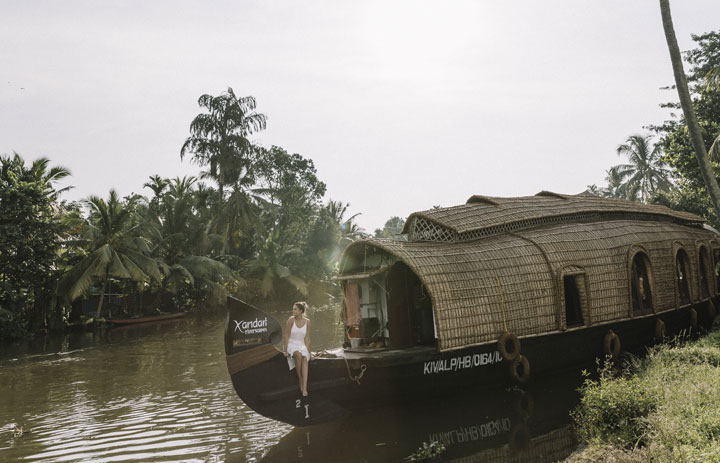 Morning drive to Alleppey, embark on your private houseboat and cruise on the Backwaters, a splendid area full of canals, lakes and coves. Your houseboats are luxurious boats with well-appointed bedrooms and ensuite bathrooms. You can sunbathe on the deck or observe the palm fringed landscape from your cabins. Apart from the mesmerizing surroundings, it’s the life along the coast that adds a touch of exotica to this experience.
The locals’ travel in canoes and you will find vegetable sellers, fishermen and other traders bringing household goods, door to door in small wooden boats. As you cruise along the backwaters, you can ask your captain to stop at villages, paddy fields and other places, enroute. Overnight on board. (Full Board) SWIM IN THE RIVER

Dewalokham, two-hour drive. A fully sustainable organic farm set on the banks of the river Kannadipuzha this delightful homestay offers a chance to explore the lovely surrounding countryside, walks in the tropical forests to a nearby waterfall, enjoy the beautiful organic spice garden. Cookery lessons are given each evening, they have produced their own cookery book, which is given to each guest. Josh and his family are wonderful hosts. Ayurveda (optional) and yoga are available, swimming pool and river swimming. 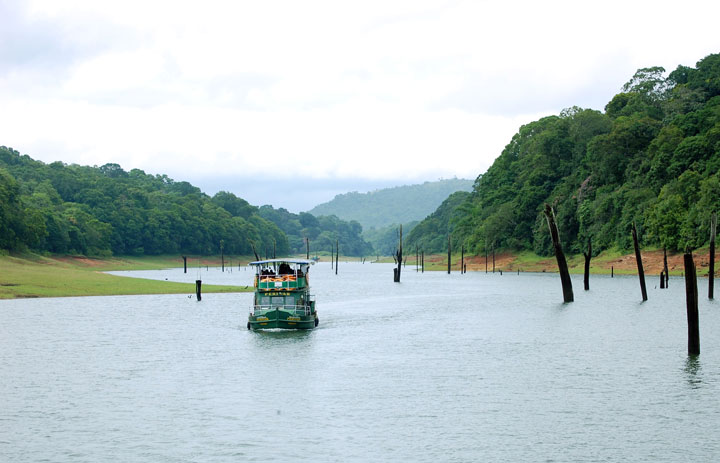 The trip usually commences by 8 in the morning and will conclude by 5 in the evening. A trek through the dense forest will take you to the starting point. A thrilling three hours is guaranteed for those opting bamboo rafting in the Periyar Tiger Reserve

The travellers will be provided breakfast comprising bread, jam, and fruits. Tea, snacks and packed lunch will also be served en route. The raft journey finally takes one to the catchment area of the Periyar Tiger Reserve. Overnight stay at Elephant Court 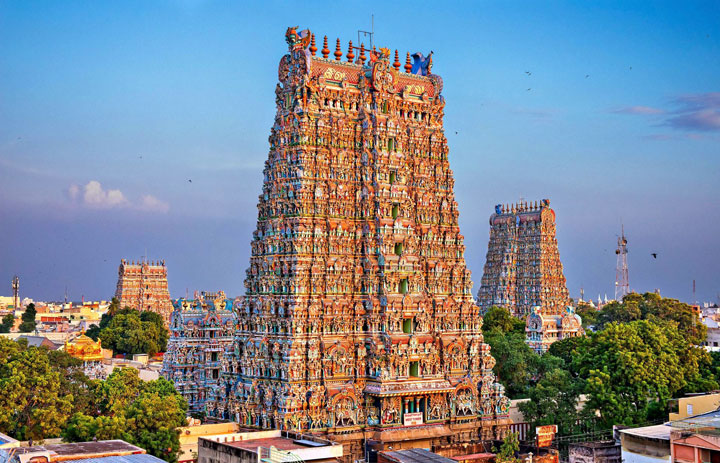 Drive to Madurai, On the way visit an organic farm (Optional). In the evening visit the Madurai meenakshi temple. Madurai has a lively food scene and a recorded history that spans two millennia. Join us on the food trail from 5 pm to 8 pm and eat your way through some of that history. Every mouthful of its street food will get you an earful of stories - of its people, its culture and way of life. Overnight at Heritage madurai. 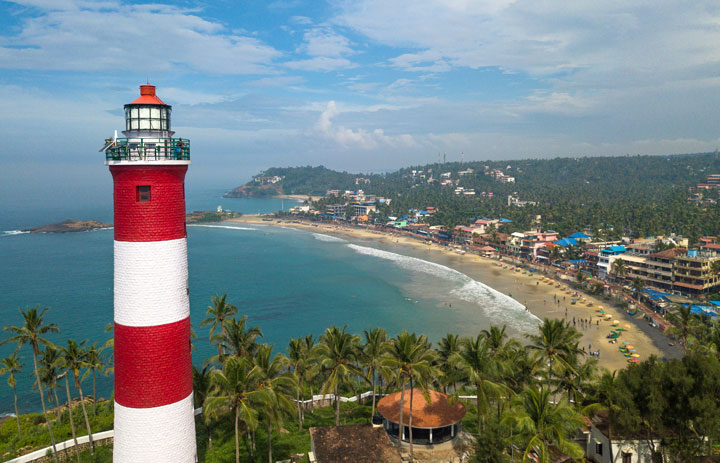 Drive to Kovalam beach. On the way visit wooden Palace. In the evening roam around the beach restaurants to have dinner. Overnight stay at Ayur Villa This tour can easily be extended, to include a few days relaxing on the beach at the end. Overnight stay at Ayur Villa Morning after breakfast transfer to Trivandrum International Airport for the onward Journey.

What is the main food of Kerala?

The staple Kerala food consists of rice, coconut, tapioca, spices, and loads of seafood; the cuisine is laden with spicy curries that use black peppers, cloves, ginger, and cinnamon.

What are some of the most popular snacks from Kerala?

What is special about Kerala food?

Kerala foods are filled with coconut and rice, and it’s steeped with flavors from spices like pepper and cardamom. The seafood dishes are fresh and delicious, as well.

How costly is food in Kerala?

The food is not pricey at all. You will get your favorite Kerala foods for 8 to 10 rupees per piece. If it’s a special beef fry, then it depends on the rates of the restaurants, but it won’t cost you much.

What is the famous food item in Kerala?

One of the most famous food items in Kerala is Idiyappam with Curry. It’s made with rice flour, salt, and water, and it steamed into a fluffy texture. The idiyappam is served with a spicy veg/nonveg curry.

What are the must-try dishes in Kerala?

Some of the dishes that you have to try are Kadala Curry with Puttu, Appam and stew, Malabar parotta with beef, Kerala prawn curry, and banana fritters.

Why does the drinking water of Kerala appear pink?

This is due to the Indian redwood that is soaked in water, according to Ayurveda, it has many health properties and is used to cure skin disorders, diabetes, and purifies the blood. It’s also a famous thirst quencher.